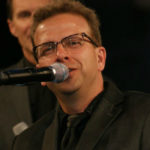 Michael Helwig, lead singer for the quartet was diagnosed with ALS last year and has continued to travel with the group. At the close of the service this morning in Green Valley, Arizona, Mike passed out in his wheel chair on the platform after singing “I’d Rather Have Jesus”. Please pray for Michael and his family and the quartet as they finish this tour tonight in Phoenix.

WE WANT TO THANK YOU FOR YOUR PRAYERS FOR MICHAEL and the Blackwood Brothers! He is better today after resting last night. We’re on our way home and he is looking forward to some time off to rest and be with his family. Please keep him and us in your prayers.