“We were on different job sites doing trim work and fixing drywall when we received the call about our DVD and CD going No. 1! It was so shocking that we both had to put the hammers and nail guns down for a moment and simply absorb the moment,” said Josh Arnett of The Singing Contractors.

“We are in disbelief yet we are so thankful,” added Singing Contractors’ Aaron Gray. “It’s unbelievable what God can do! It’s just as unbelievable that people want to hear two guys who wear big beards belt out a few tunes!”

Their recent chart success comes on the heels of their guest appearance on Fox & Friends, where the duo performed an a cappella version of their title track, along with a heartrending version of the patriotic tune “God Bless America.” While in New York celebrating their release, the pair also spoke with Guideposts, FoxNews.com, Fox Nation’s Starnes Country, The Todd Starnes Show of Fox News Radio and more. 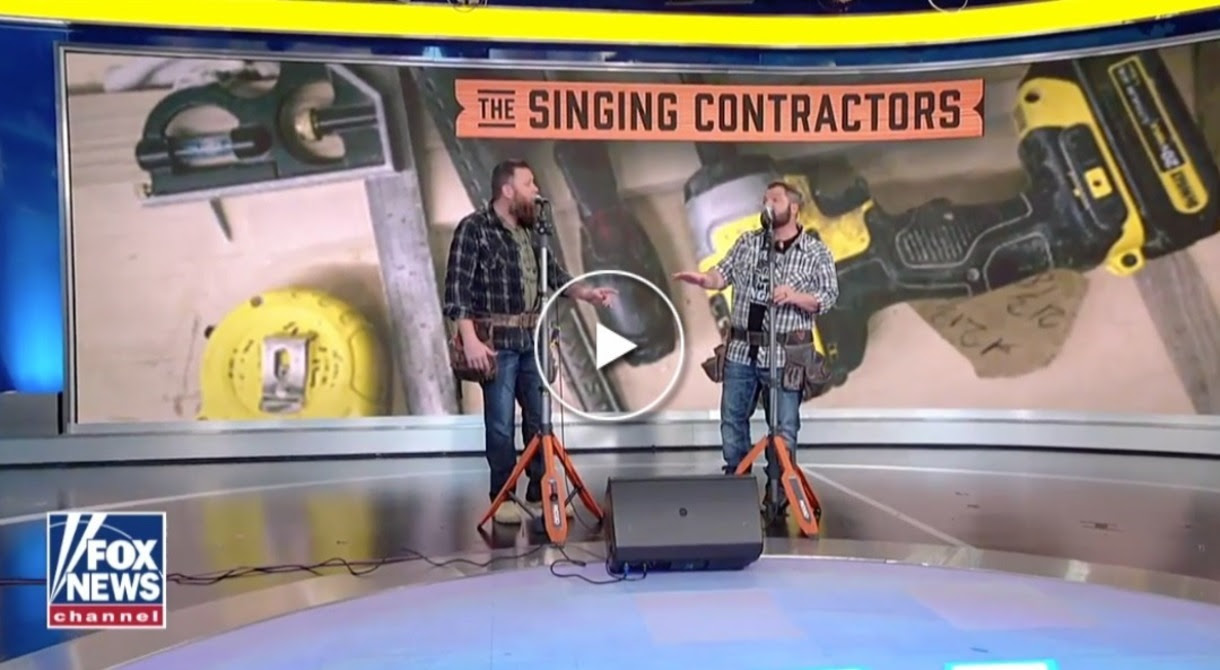 Complementing the 16-track project, the Indiana natives released a LIVE performance DVD of the new faith-based collection, filmed live at Gaither Studios. The DVD also includes a special interview of the powerhouse duo sharing their unlikely story with gospel legend Bill Gaither. “The Singing Contractors are the real deal,” shared Gaither, recording artist and founder of Gaither Music Group. “It is no wonder millions of people are following them on social media. What you see is what you get, and they were a delight to work with.” A national television special premiered this month on RFD-TV, and will air again on RFD-TV Feb. 28th at 6:30pm and again on Mar. 2nd at 6:00pm. The special will continue to air this spring on numerous networks throughout the U.S. including DISH TV, DirecTV, TBN, RFD-TV, GaitherTV, FamilyNet, CTN, GMC, GMTN, Guardian, Liberty, TCT and TLN. It will air in Canada on Vision TV, CTS, The Miracle Channel and Hope TV.

Working on a Building is distributed through Capitol Christian Distribution and Universal Music and is available throughout general market stores, Cracker Barrel Old Country Store® and the Christian marketplace in addition to online retailers including iTunes, Apple Music, Amazon, Amazon Music and www.gaither.com.

To listen to Working on a Building, click here.

About The Singing Contractors:
Viral sensations The Singing Contractors’ highly anticipated national debut project, Working on a Building, Hymns & Gospel Classics, is available now. The foundation of the unlikely pair stems from a viral video of their poignant rendition of “How Great Thou Art,” performed in an unfinished corner of a home remodel which led to over one million views in almost 24 hours and an appearance on the “Fox & Friends” morning show. The duo, comprised of Indiana natives Aaron Gray and Josh Arnett, has continued to amass a following due to their fun-loving personalities and compelling gospel covers. Growing up in singing families, hitting the roads for weekend performances, Gray and Arnett are seasoned talents with strong work ethics, who are now building a national music platform in addition to houses.