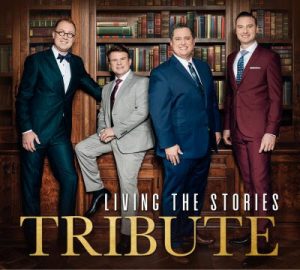 NASHVILLE, Tenn. (September 17, 2019) – Tribute Quartet has released the inspiring song, “The Healer Hasn’t Lost His Touch,” to radio in advance of the forthcoming release, Living The Stories.
The song – written by Jason Cox, Tony Wood and Joseph Habedank – is resonating strongly with audiences in concert and on the airwaves. “We had this song on hold for a while,” says Josh Singletary. “We discovered it around two years ago. The response has been overwheling. We’re getting message after message from folks being impacted by this song.”
The song is for the first single from Tribute Quartet’s highly anticipated Daywind Records release, Living The Stories. The recording features ten new songs with new member Gus Gaches. Living The Stories releases on Friday, September 27, 2019, during NQC, the National Quartet Convention.
ABOUT TRIBUTE QUARTET
Since 2006, multi-award winning and multi-Dove Award nominated recording artist Tribute Quartet has become one of the country’s most dynamic, beloved and sought after male quartets in all of gospel music. Gary Casto, Josh Singletary, Gus Gaches, and Anthony Davis have proven to possess a combination of musical talent, warm and engaging personalities, and a focus that has kept them on the path to continued success since their inception.
In an ever-changing musical climate, Tribute has remained steadfast in their goal to make music that is both timely and relevant to the current musical scene and their fan base while propelling their mission to share the Hope of the Gospel. With a career that has already spanned the U.S., as well as several foreign countries, Tribute continues to shine a Light into a world in need of truth, hope, love and healing.
With several awards and number one songs to their credit, Tribute’s music continues to inspire and encourage generations of believers. With their passion for this music and the message it brings, this team is dedicated to a quality presentation of communication through the art of gospel quartet music.
Fans, peers, and industry insiders agree Tribute brings a breath of fresh air to Gospel music.