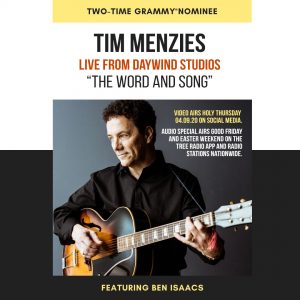 NASHVILLE, TN (APRIL 7, 2020) – Two-Time Grammy Award® nominee Tim Menzies will share his amazing vocal and guitar talents in an hour-long Easter Week presentation entitled “The Word and Song” across social media platforms on Thursday, April 9, 2020, at 3 p.m. eastern/2 p.m. central/1 p.m. mountain/12 p.m. pacific.  The Easter Week special will air on Facebook®, YouTube®, and Instagram® on a variety of pages including those of Tim Menzies, Daywind Records, and the Isaacs.

An audio version of the special will air beginning on Good Friday across the country on Southern Gospel radio stations and The Tree Radio app.  To hear it on the Tree Radio app on Good Friday at 8 a.m., 1 p.m., and 6 p.m. eastern, download “The Tree Radio” app from www.thetreeradio.com or on the Apple Store for iPhone or Google Play for Android.  Programming can also be streamed on your computer from www.thetreeradio.com.
The New Day Records’ artist recorded the special at Daywind Studios with Ben Isaacs on the upright bass and Tim’s wife, Brenda, accompanying Tim and Ben on vocals.  The special is a relaxing and reflective spiritual journey in word and song that will lift every viewer’s spirits.  In the special, Tim reads from the Word of God and shares hymns and songs from his latest albums.
Tim Menzies is a consummate musical artist and songwriter.  His music pedigree is astonishing, having travelled and played with, or written songs for, Johnny Cash, Dolly Parton, George Jones, Loretta Lynn, Merle Haggard, Kenny Rogers, Tammy Wynette, Waylon Jennings, Willie Nelson, Reba McEntire, Randy Travis, Josh Turner, and others.  Tim gave his heart to Jesus in 1991, and has since devoted his immense talents to spreading the Gospel. Tim has led hundreds of Bible classes and written many songs with his considerable knowledge of scripture.  Since becoming a Christian, both of his album releases, “His Name Is Jesus” (2019) and “His Way of Loving Me” (2014) have been nominated for Grammy® Awards.  Along with producer, Ben Isaacs, Tim crafted his debut release for New Day Records that featured guest vocalists the Isaacs, Gaither Vocal Band, Vince Gill, Karen Peck, and Rhonda Vincent.

New Day Records is a division of Daywind Music Group and home to the LeFevre Quartet, Michael Combs, Tim Menzies, HighRoad, the Griffith Family and, The Sound. The label is distributed to retail through New Day Christian Distributors and the Orchard, covering all major physical and digital outlets. 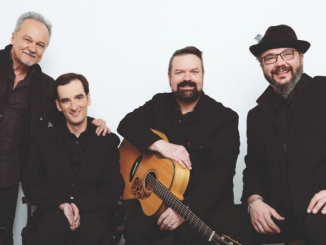 High Road – The Day I Got Saved