A few years ago The Williamsons were blessed to have our first top 30 song. A song Lisa wrote titled “He’s Leading Me” came in at #28. We were exited, of course, and even more so when we begin to run across clips on YouTube of various Gospel singers using the song in their churches and other groups calling wanting permission to record it. Lisa told me what impressed her to write the song. She said as a little girl one of her favorite things to do was to go fishing with her father, Larry. Of course it can get pretty scary around some of these Oklahoma farm ponds because the grass and weeds are usually pretty high. A little girl could let her imagination run wild thinking what could be hiding in there. Her dad would go in front of her and walk down the grass and tell her, “Just follow me and step where I step. I’ll make a path for you.” She never forgot how her loving father would prepare the way when the path was difficult.

I remember one time when were scheduled to sing at a little church in the country. I was asking a man for directions for the best way to get there. He worked in the oil fields and knew all the country back roads. As he was telling me the shortest way to get there he could tell by my “deer in the headlights” look that I was already lost. He said, “If you can wait just a few minutes you can just follow me.” That made it so much easier. He would go a few miles and when he turned I would turn where he did. I still didn’t know the way but I didn’t have to. He knew the way and all I had to do was follow him. We soon arrived where we were going.
We often sing the old Mosie Lister song “I Know Who Holds Tomorrow”. Thinking about 2016 and beyond can get pretty scary if we dwell on it too much. But the good news in that One has already gone ahead of us preparing the path. He will make it passable for us. We don’t know what tomorrow holds but that’s all right. We don’t have to know. He knows. While we may not know the exact path we’re taking all we have to do is to follow Him. Turn where he turns. Continue straight where He does. Go through doors He opens and don’t try to kick ones in that He hasn’t opened while on the journey – because He’s leading me. In 2016 and, should The Lord tarry, beyond.
Donnie Williamson
The Williamsons
Williamsons Website

The Williamsons Website
Excitement is the best description for the Williamsons , as they have been blessed with their first #1 on the Singing News Magazine Monthly Chart for December 2015.

Penned by Lee Black and Gina Boe, and sent to radio by Family Music Group, "Shout” is a joyous song taking you through history from Joshua to Gideon and on to our King coming again. Something special happens when God's people "Shout”.

The Williamsons have become one of the most polished mixed quartets in the entire Southern Gospel Music genre. Coming from their latest album Tell Somebody, this may not be the only #1 song you will see from this dynamic young group.

Group manager Donnie Williamson stated, "What a blessing we have received with our first #1 song. This is certainly a group effort. I believe we have the greatest singers in the gospel music world with Karl Rice, Darin Hebert, and my wife Lisa." 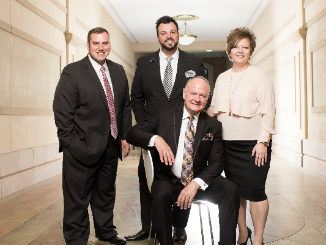 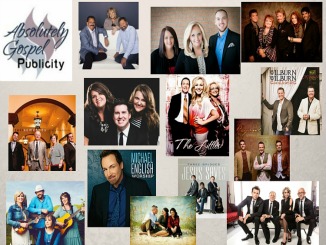 AG Publicity Artists Do Well In 2015