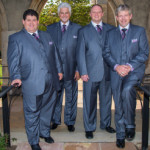 Family, Fun and Freedom Fest  Family, Fun and Freedom Fest to take place May 27-28, 2016 Grace Baptist Church, Seymour, Tennessee John Rulapaugh is pleased to announce the “Family, Fun and Freedom Fest,” an ALL NEW gospel music event, scheduled to take place Memorial Day weekend. (Friday, May 27 and Saturday, May 28, 2016.) The members of Freedom Quartet each have families steeped in the traditions of Gospel Music, and this event is ALL about FAMILY! For John Rulapaugh, it began at an early age, singing in church with his mother at the piano. Dale Shipley was born into a musical family that the Gospel Music world would come to know as “The Song Masters.” Preston Garner’s father sang in quartets until his boys became of age and joined him in “The Supernals,” and Burman Porter – well, some things are better experienced than told… you don’t want to miss it! The event kicks off at 7:00pm on Friday, May 27th with a concert featuring the Supernals, and Freedom Quartet. The evening will conclude with a command performance of the 1990’s era Supernals, reunited for this one-time event. Doors will open at 6:00pm. Saturday will be packed with fun for the whole family. Beginning with a Veteran’s Appreciation Breakfast – open to everyone (free for Veterans and military with ID), bounce houses and inflatables for the kids, a dunk tank for Burman, corn hole and pie eating competitions and plenty of music (featuring The Vineyards, The Joylanders and Freedom Quartet) throughout the day. Grace Baptist is hosting an All-American cookout lunch. A talent competition will be held – the winners of which will receive a handsome, grand prize package including the opportunity to sing during the Saturday evening concert! Saturday evening’s event dubbed the ”Gold Star Memorial Concert” will begin at 6:00pm, and features The Joylanders, The Song Masters and Freedom Quartet. The evening will open with a memorial honoring the sacrifice of our community’s Gold Star famillies. (Attendees and members of the local community are encouraged to register the name(s) of their loved ones who made the ultimate sacrifice for our country. Those names will appear in the event’s souvenir program and will be read aloud during the memorial.)