Nashville, Tennessee (April 28, 2016)  The Gospel trio, 11th Hour, just received news that “Mountain Moving Faith” went number one on both the Absolutely Gospel Music Weekly Chart for 3 weeks and the Singing News Monthly Chart for June. This number one comes for the trio just 3 months after their first number one for “Jesus Is In The House”.

Baritone for the group, Grant Gibson said, “We just want to say a big ‘Thank You’ to all the fans and DJ’s for getting ‘Mountain Moving Faith’ to number one.”

In addition to the number one 11th Hour recently won the coveted Absolutely Gospel Music Ovation Award for the Progressive Song of the Year with “Jesus Is In The House”.  The group also performed the song at the Awards Celebration held on April 12th at the Nashville First Church of the Nazarene in downtown Nashville.

Amber Eppinette, Soprano and manager of the group exclaimed, “We are so thrilled and blessed!!! Thanks to the Unthank Family, our families for their love and prayer, our Crossroads family for all of their support, the writers of this song…Karen and Rachel, but most of all JESUS CHRIST!! He’s given us more than we all deserve. It’s an honor to serve Him!”

11th Hour – Go Tell It On the Mountain 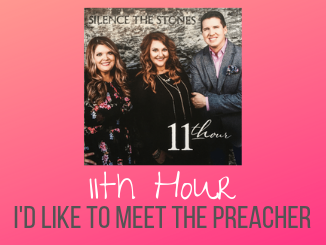 Staff Picks – Our Favorite Recordings of 2017