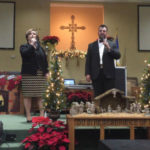 WETUMKA, Okla (December 23, 2016) Multi-award winning Gospel group The Williamsons recently ended 2016 with a wonderfully busy holiday season. For several years, The Williamsons have produced a special Christmas program which has been performed as early as Thanksgiving night and finish the season as late as Christmas Eve. This year was no exception as the group closed out the year with a very successful tour and show to top off one of the group’s most favorable and rewarding runs since its inception.

Donnie Williamson stated, “Many of my friends take off the month of December. This time of year is always so busy with our own family functions and Gospel concerts seen to slow down. I decided several years ago to produce a Christmas show that would be fun for the whole family, while still sharing the glorious Gospel message. Believe me, it keeps us busy.” 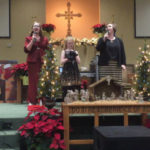 The Christmas show features The Williamsons singing Christmas hymns, seasonal classics and also includes an occasional skit and comedy. The daughters of Donnie and Lisa, Sadie and Olivia, are also a big part of the night. The Williamsons perform as many as 15 programs in a three week span.

The group received nominations at the Absolutely Gospel Music Awards for Song of the Year and Music Video of the Year (for the hit single “Monday”) as well as Songwriter of the Year (Artist) for group lead vocalist and songwriter Lisa Williamson. In addition, the group was nominated for Favorite New Group in this year’s Singing News Fan Awards.

The Williamsons are currently finishing up a new hymns project that will be out the first quarter of 2017 and are writing and choosing new material for a mainline release also to be released next year. The group plans to start recording in Spring 2017.

You can learn more about the Williamsons by going to http://www.williamsonsmusic.com.