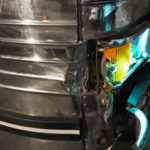 Despite the roads being mostly clear after a recent snow shower, about 30 miles north of Louisville, Kentucky, a Chevrolet Impala hit some black ice and spun around in the middle of the highway. When it first happened, an 18 wheeler in front of them blocked their view. He was able to move over into the other lane, but The Williamsons’ bus was not able to change lanes due to another truck directly beside them. They weren’t driving very fast, but still were not able to get the bus totally shut down because of the slick road conditions. As a result, the group’s bus broadsided the car and shoved it about 40 feet down the highway.

Group manager, Donnie Williamson stated, “No one seemed to be hurt, praise the Lord! A man in the car was taken to the hospital, but it appeared that he was just shaken up. The driver had a bump on his head but didn’t even go to the hospital. No one on the bus suffered any injury. God is so good and his protective hand was on us.”

The impact shoved the frame of the bus inward a bit, and the door was unable to be opened. They were able to continue driving the bus to a repair shop in Springfield, Tennessee, at least getting that much of the damage repaired. The group is currently heading back to their home in Oklahoma. They are requesting that all of their friends keep them in prayer that they will make the right decisions on how to proceed with getting the rest of the repairs completed.

You can learn more about the Williamsons by going to http://www.williamsonsmusic.com.