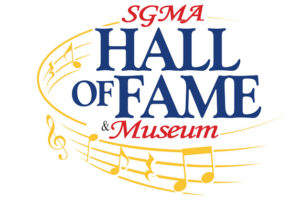 I have always been proud of the work put forth by the Southern Gospel Music Hall of Fame in Pigeon Forge, Tennessee.  Their tireless efforts honoring the heritage of our music goes well beyond the imagination of those from the outside looking in.  The nomination ballots should be going out soon for this years class of inductees.  I strongly urge all who are not currently members of the Southern Gospel Music Association to please invest a $20 bill in the history AND future of our music for a one year membership.  With that membership comes the very nice perk of nominating the upcoming class of inductees.  Many express their own ideas over who should be in the Hall of Fame, whether in writing or in public forums here on the internet, but no bones about it, to make this happen you must first JOIN THE SGMA!  Every penny I have placed into my membership through the years has been completely worth it, as I have watched not just heroes, but people who have become some of my dearest friends, achieve southern gospel music’s highest honor.  The purpose of this month’s article is to introduce or reintroduce names of some of the deserving yet perhaps forgotten pioneers of our music that I would love to see inducted into the Hall. 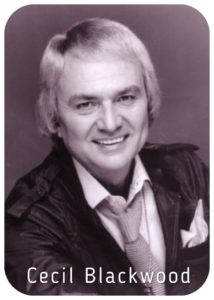 Cecil Blackwood
The Blackwood Brothers have been well-honored for their contributions to gospel music.  James, Doyle, RW, Bill Lyles, Bill Shaw, JD Sumner, Wally Varner, and London Parris have all earned their way into the Hall, but somehow Cecil Blackwood has missed his due.  Cecil died prematurely in 2000 at age 66, and much of the Blackwoods’ last twenty years were spent outside of the southern gospel industry, but his 46 years worth of contributions to their ministry must not be ignored any longer.  Cecil was not the superstar vocalist that his brother RW was, and usually stayed in the background as a when it came to features, but rarely has gospel music known a more dependable baritone.  He managed the group for nearly three decades, through highs and lows, and never missed a date with the group until the cancer weakened him to the point that he could no longer perform.  His tireless efforts should honestly have earned him a spot in the Hall many years ago.

Ernest “Jim” Carter
The only remaining original Chuck Wagon Gang member that is not in the Hall, Jim Carter has been taken for granted perhaps most due to the numerous features of his lovely sisters, Rose and Anna.  Yet Jim was as much a part of the Chucks’ unmistakable sound as the sisters were.  That heavy, resonant, immediately recognizable bass voice of his was a staple of the Chucks’ recordings from their beginning until his death in 1971.  Long after his retirement from the group in 1951, the Oak Ridge Boys still showcased their bass singers’ impressions of Jim in “Go Out to the Program”. Such was the mark he made on their legendary sound. 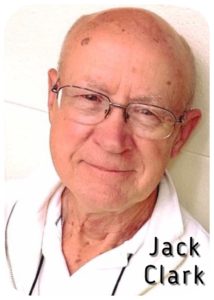 Jack Clark
The majority of Jack Clark’s career has been spent furthering the musical education of multiple generations of gospel musicians, but his resume as a gospel quartet pianist is also large.  He began his musical career as pianist with the Homeland Harmony Quartet in 1955, later playing for The Songfellows, The Harvesters Quartet, The Landmark Quartet, and again with the Homeland Harmony by the 1970s and 80s.  He has served as a teacher for numerous music schools across the nation, has written many great songs that can be found in just about any singing convention book, produced for several years with Mark V Records, written some very entertaining literature, and was inducted into the Southern Gospel Piano Roll of Honor in 1997.  He is loved by thousands upon thousands of gospel music fans, yet his name has rarely come into mention as a Hall of Fame candidate.  It is clear he possesses the credentials.

Paul & Ann Downing
Paul and Ann could go into the Hall of Fame just for forming The Downings, if for no other reason. But truth be told, they each spent their early years performing with icons in gospel music. Ann, of course, made a name for herself with the Speer Family, and Paul performed with the Dixie Echoes and Rhythm Masters. Two of the greatest communicators in our music’s history, Ann’s smooth alto/soprano range soothed, while Paul’s bass rumbled to the point that you wondered if this is what God himself sounded like. During the eight year span of their career, the Downings placed eighteen songs in the Top 20 of the Singing News Charts, won Dove Awards and fan-voted awards, and packed perhaps more excitement into their records than any group of their day. Once listeners heard them, they never forgot them.

James & Roni Goss
It was a given that Lari Goss deserved to be placed in the Hall of Fame.  What a shame that his untimely death preceded it, yet none of us can ever foresee such circumstances.  Lari’s brothers deserve attention as well. Roni Goss is still with us, and still very active in singing, playing, producing, and arranging after some 60 years. 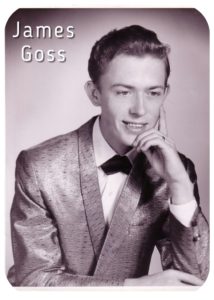 And then there was James.  Roni once said, “James was the oldest, the leader, and the dreamer.”  James’s tragic death in 1980 brought an end to one of the most important groups in our music’s history.  The monumental impact that all three Goss Brothers have placed on gospel is only in recent years being truly realized.  They were not just an outstanding singing group, but all three were great studio musicians, songwriters, and producers.  Their influence is felt upon musical artists who do not even know who they are.

Jeanne Johnson
Perhaps the most lovely and dependable female voice of all time, Jeanne Johnson can still touch the soul.  She has done so for more than fifty years, first as part of the Gethsemane Quartet, and then through perhaps the most lucrative years of the Speer Family’s career.  Bill Gaither could always count on a first-rate performance by her in his productions.  Not only is she a lovely singer, but she is the epitome of class both onstage and off. 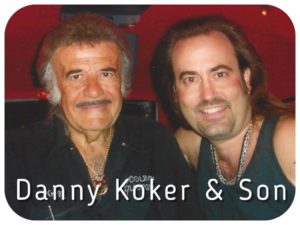 Danny Koker
Father of “The Count”, and father of the distinctive sound of The Cathedrals, Danny Koker wrote the the arrangements, intricate harmonies, and those two-part/four-part transitions that I have always most identified with the Cathedral sound.  Two of the quartet’s most legendary albums, The Cathedral Quartet with Strings and The Cathedral Quartet with Brass were the brainchild of none other than Mr. Koker.  After his departure from the group in 1968, George and Glen framed much of the music over the next 31 years around Koker’s creativity.  George, Glen, and Roger are in, and it is likely that any member of the group post-1980 will earn their due recognition, but I lobby for Mr. Koker’s induction next. 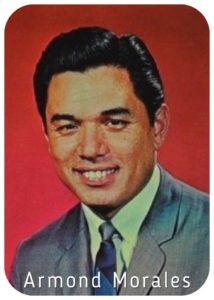 Armond Morales
Just about any serious bass singer in our music will tell you that Armond Morales is one of the vocalists they have studied the most.  Armond is an artist that has been unintentionally taken for granted.  He was part of the “blue-print” aggregation of the Weatherfords from the late 50s and early 60s.  In fact, he is the only member of that lineup at this point that has not been inducted.  He led the Imperials for four decades, not just a great southern gospel quartet in their early years, but the pioneers of a contemporary Christian movement that influenced all genres of music.  Perhaps people have just assumed that Mr. Morales is in the Hall.  Significant figures can fall through the cracks sometimes. 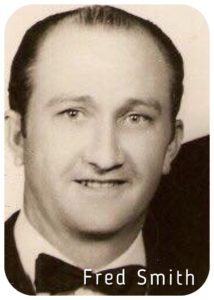 Fred Smith
While Joe Roper and Gerald Williams were the champions for the legacy the Melody Boys Quartet, Fred Smith was their musical soul.  Smith joined them in 1946, and his distinctive and expressive vocals set the standard for their sound over the next six decades.  He not only set the standard for the Melody Boys, but he also served as an inspiration to a younger artist who would take his style and place it into overdrive, and that young artist was Jake Hess.  Smith mentored many young gospel singers. Melody Boys lead singers like James Burleson, Jonathan Sawrie, Terry Robertson, and yes, yours truly, patterned many of our performances after him.  And of course, Smith’s influence on Jake Hess spanned decades of influence from there.  But if anyone were to comment to Jonathan Sawrie that he sounded a lot like Hess, he would likely tell them, “Naw, I’m doing Fred Smith.” 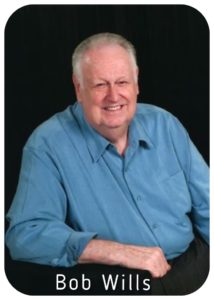 Bob Wills
Namesake of the famous Texas Playboy, but most importantly longtime patriarch of one of the oldest singing families west of the Mississippi, The Wills Family.  Bob Wills was a driving force behind not just the Wills Family, but one of Texas’s finest quartets, The Inspirationals, as well as Sword and Shield Records, the Wills Family Inspirational Time television show, countless young gospel singers and musicians, and multiple major concert promotions in the Lone Star State.  In fact, many gospel music artists still contact Mr. Wills for a venue when passing through the Dallas/Fort Worth area.  Always modest and always gracious, Mr. Wills is one of those quiet elder statesmen who have been the backbone of the gospel music industry.
Again, I appreciate the SGMA for keeping us aware of our pioneers and the joy that their music still brings to us. Please visit www.sgma.org to learn more about our music’s awesome heritage, and if you’re not a member, join today!
And if you wish to contact me, please feel free to email me at alan@alankendallmusic.com. Thanks and see you soon!

Contributing Writer at Absolutely Gospel
Alan is a Christian music artist, but performs a wide range of musical styles. He can easily present a clean, family-oriented variety program for all ages. Alan has been blessed to perform on some major stages, including the National Quartet Convention, Dollywood, Grand Ole Gospel Reunion, Memphis Quartet Show, Gospel Jubilee Cruise, and the Georgia Mountain Fair. Alan has performed in large churches, small churches, concert halls, at banquets, picnics, Senior events, youth rallies....anywhere that invites him to present his music. One can be assured that when attending a performance by Alan, you will certainly be entertained, and Alan will work to stir your hearts with the message in the songs! 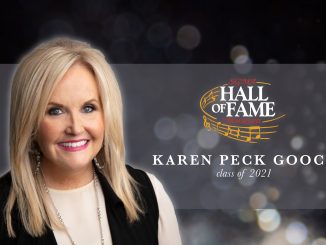 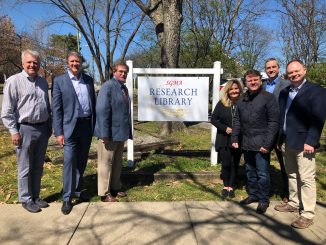