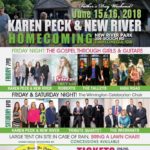 DAHLONEGA, Ga. – (March 1, 2018) – Multiple Grammy Award nominated and six-time Dove Award winning Gospel group Karen Peck and New River is excited to announce their 2018 Homecoming in partnership with Abraham Productions. On Father’s Day weekend the group will continue its annual tradition of hosting the very best in Christian Music. This year it will fall on Friday, June 15, 2018 and Saturday, June 16, 2018 and it will take place at New River Park in Dahlonega, Georgia.

On Friday night at 7:00 PM KPNR will host the Gospel Through Girls and Guitars Tour which features Karen Peck and New River, the Talleys, HIGHROAD, and the first runner-up on The Voice, Emily Ann Roberts. Ray Flynn, President of Abraham Productions, will also be the guest speaker.

Saturday night at 6:00 PM KPNR will be hosting Tribute Quartet, The Whisnants, and the Wilmington Celebration Choir.

Karen Peck Gooch said, “We are very excited about partnering with Abraham Productions this year. Every year we have such a wonderful Homecoming but I believe this year will be the best one we’ve ever had. We want everyone to join us for a fantastic weekend!”

For more information about the Homecoming call Abraham Production at 888-238-6858 or go  to https://www.karenpeckandnewriver.com/christian-music-nights-2018

To purchase Hope For All Nations click any of these icons or go to : https://www.karenpeckandnewriver.com/product/hope-for-all-nations/