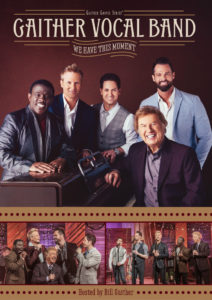 NASHVILLE, Tenn.—May 14th, 2018–Gospel Music Hall of Fame members and GRAMMY® Award winners the Gaither Vocal Band will release an all-new performance video on Friday, May 18th.  We Have This Moment (Gaither Music Group) captures stage performances of 14 of the group’s recorded songs, most of which can be found on the companion We Have This Moment CD, which released in October of last year.  Produced by famed country and gospel music performer and studio musician Gordon Mote, the CD recording debuted at #1 on the Southern Gospel chart and at #4 on the Contemporary Christian Music chart, according to Nielsen Soundscan.

“The longer I live the more I learn to appreciate here and now,” stated group founder and bass singer Bill Gaither, “this moment…this place in life… this group of people with whom I am privileged to collaborate on these songs.  I am blessed beyond measure by these men and by the way our collective contributions have brought something very special to this collection of songs.  I hope you are as blessed by this recording as we have been to create it.”

“For me, ‘Jesus Messiah’ is a great song of perspective that Jesus came not to be served. He came to serve,” stated Hampton.  “It’s a great reminder to me of why we are here. I’m not here for you to do something for me. I’m here to serve you because that’s exactly what Jesus did for us.  He came for one purpose, and that was to rescue sinners.”

“I’ll Worship Only at the Feet of Jesus,” penned by Gloria Gaither, Bill Gaither and J.D. Miller, is a beloved favorite that longtime fans of the group will recognize.  “I like the line in this song that says, ‘There’ll be no other gods before Him,’” stated Suttles.  “Sometimes we have to sit back and look at what’s really important–at what really matters. What’s the purpose of what we’re doing? What do we want the final result to be? I think sometimes we get hung up on things that won’t really matter in the end.  We focus on what looks good right now and what feels good right now, and a lot of times we don’t think of others enough.”

The first radio single from the release, “Hallelujah Band,” which landed in the Top 5 on the national radio chart, highlights how these five unique voices and personalities have come together to create something special.  Written by Becca Mizell and Sam Mizell, the up-tempo number was featured via social media as a performance video that has garnered over one million views on Facebook.  The group’s follow-up video of “Chain Breaker” has received nearly three million Facebook views.

Both of these performance videos are found on the new We Have This Moment 90-minute DVD release, which includes behind-the-scenes interviews with the group members and Gloria Gaither, who penned new words to a classic melody for the recording with the song “Hymn of Praise.”

We Have This Moment will be part of a TV special airing on over 15 networks that carry the “Gaither Gospel Hour” weekly including RFD-TV, DIRECTV, TBN, The Heartland Network, Dish TV, FamilyNet, CTN, GMTN, Guardian, Liberty, TCT, TLN and GaitherTV.  It will air in Canada on Vision TV, The Miracle Channel, Grace TV and CTS.  The recording is featured onwww.gaither.com, in the Gaither Catalog Collection, via the company’s social media properties and on the Gaither YouTube channel, which garners over 22 million views monthly.

The release comes on the heels of three 2017 GMA DOVE Award nominations for the group in addition to a 2017 GRAMMY® Award nomination for Best Roots Gospel Album.  Their Better Together recording debuted at #1 on the Southern Gospel chart and at #9 on the Contemporary Christian Music chart, according to Nielsen SoundScan.  The group has garnered six GRAMMY® nominations, two GRAMMY® Awards and 18 GMA DOVE Awards to date.

We Have This Moment is exclusively distributed by Capitol Christian Distribution and Universal Music and will be available throughout general market stores and the Christian marketplace in addition to online retailers including iTunes, Amazon and Gaither.com.  It is available now for pre-order at Gaither.com, Amazon.com and CBD.com.

For further information regarding the Gaither Vocal Band, please visit Gaither.com or connect on Facebook at www.facebook.com/gaithermusic or on Twitter: @gaithermusic

For a video teaser of the new We Have This Moment DVD, visit:  https://www.youtube.com/watch?v=igWjfmXxdi8

We Have This Moment DVD Song Listing:

LIVIN’ IN THE RHYTHM OF GRACE

I’LL WORSHIP ONLY AT THE FEET OF JESUS

LOW DOWN THE CHARIOT

WE’LL TALK IT OVER

WE ARE ALL GOD’S CHILDREN

WE HAVE THIS MOMENT, TODAY

ABOUT THE GAITHER VOCAL BAND

The Gaither Vocal Band has been making music since the early 80s when four men gathered around a piano before a Bill Gaither Trio concert and began harmonizing on the quartet classic “Your First Day in Heaven.” More than a quarter century later, the list of men who have comprised the Gaither Vocal Band over the years reads like a “Who’s Who” among gospel music’s best-loved male voices. 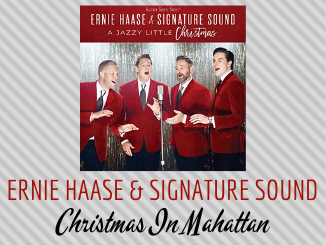