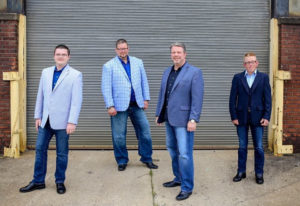 Nashville, TN (November 15, 2018) GloryWay Quartet of Mansfield, Ohio has been named Sunrise Quartet of the Year. They were honored at the Diamond Awards, on October 30 in Pigeon Forge, Tennessee. The Diamond Awards is an annual event held in association with Scoops Magazine. Each year fans are asked to nominate their favorites in several categories.  For the past two years, GWQ has been in the Top 5 in the Sunrise Quartet of The Year category. The award is given to a new and developing full-time quartet who has seen major growth in their career as evidenced in radio airplay and personal appearances during the past year.

Founded in 2002, Justin Crank is the owner and lead vocalist of the group. God has opened countless doors and provided many exciting opportunities for GloryWay Quartet. Currently, they are signed with Capitol Artists, a prestigious booking agency in the world of Southern Gospel entertainment. Butler Music Group, led by 40-year veteran Les Butler, has recently signed on as a consultant to their ministry.  The ministry has expanded far past the borders of Ohio and the quartet stays consistently busy, traveling nationwide with an average of over two hundred concert dates per year; 65,000+ miles in 2017!

The group is no stranger to nationwide radio, with many successful radio releases, which include “It’s So Peaceful,” “Live With Jesus” and “No Hill for a Climber.” Their singles, “Trading A Cross For A Crown,” and “You Can Count On Him” off of their new CD, A New Beginning, are currently playing across the country. GloryWay Quartet has participated in numerous National Quartet Convention showcases throughout the years. They were in two at the convention in October. In 2014, GloryWay Quartet was nominated for the GME Top 10 for Quartet of the Year. They were also the Showcase Winners of the 2016 American Gospel Celebration hosted by Pastor John Hagee.

GloryWay Quartet has also brought their ministry to outreach projects, such as Autism Awareness and Breaking the Chains Community Impact Services. The quartet also had an exciting opportunity to perform in the well-known, Is What it Was Elvis Show, where they worked alongside Elvis’ band leader, Joe Guercio. GloryWay Quartet is also a popular addition to many outdoor events such as state fairs and festivals including, Punxsutawney, PA, Wayne County Fair, Hancock County Fair, and the annual Singing on the Groundsin Mansfield, just to name a few. The group has also performed at the Columbus Clippers Baseball Faith & Family Night, as well as the Thomas Road Baptist Church in Lynchburg, VA. Upcoming concerts include a two-day appearance at the Impacting Addiction With Christ Services and singing at the Grafton Ohio Correctional Facility for their Faith and Family Day.

The group has recorded six projects which include a Christmas CD and two live recordings. The group consists of, Justin Crank/lead vocalist, Bryan Langley/tenor, John Cole/baritone and bass singer Justin Sayger. GloryWay Quartet continually boasts a lineup with seasoned ability to impress even the least of Southern Gospel Music fans! The quartet is quickly gaining momentum in the world of Southern Gospel entertainment. They have a heart for the lost, the integrity to go the extra mile, and talent without limitations to share with anyone who will lend an ear.

To learn more about GloryWay Quartet, visit them online at  www.glorywayquartet.com  or on Facebook at www.facebook.com/gloryway.quartet