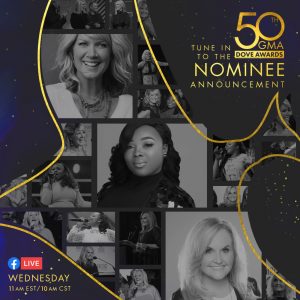 NASHVILLE, Tenn. (Aug. 9, 2019) – The Gospel Music Association (GMA) celebrates its golden anniversary on Christian and Gospel music’s biggest night. The 50th Annual GMA Dove Awards will take place in Nashville, Tennessee on Tuesday, October 15 honoring outstanding achievements and excellence in Christian music since 1969. The 50th celebration will be a powerful evening of high-energy and unforgettable vocal events paying tribute to 50 years of special appearances and sensational stage highlights over the decades. Performances representing modern Rock, Rap/Hip Hop, Pop/Contemporary, Inspirational, Southern Gospel, Bluegrass, Country, Worship and more will make up an evening praising the rich musical diversity from the past, present and future of Gospel and Christian music.

The GMA Dove Awards celebrate the contributions of artists from every style of Christian/Gospel music. Nominees are determined by over 1,600 professional members, and winners will be voted on by the entire GMA membership of nearly 2,500. For more information or to purchase tickets, click here.

The awards will air globally for the 4th straight year on Trinity Broadcast Network (TBN) with Christian and Worship Music being some of the most played songs around the world.

About Gospel Music Association & Foundation:
Founded in 1964, the Gospel Music Association serves as the face and voice for the Gospel/Christian music community and is dedicated to exposing, promoting and celebrating the Gospel through music of all styles. The GMA produces the GMA Dove Awards, The GMA Hall of Fame Induction and Honors Ceremony and the IMMERSE Conference. For more on supporting the GMA or becoming a member, please visit www.gospelmusic.org.