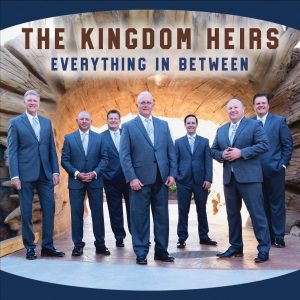 The Kingdom Heirs latest release Everything in Between is out and drawing attention. It’s a bit different than previous releases and I have to say I was a little unsure about what to expect when I first heard about it. The boys have always delivered quality arrangements and exceptional vocals. With the powerhouse lead Arthur Rice and “the beast” Jeff Chapman laying down a solid foundation along with Jerry Martin’s soaring highs and the smooth baritone of Loren Harris how could they possibly deliver anything else but quality. This latest project shows-off all their talents vocally as well as instrumentally.

The award-winning band is featured on the classic numbers Crying in the Chapel, with a Floyd Kramer style and feel. The hymn Sweet By and By showcases the piano talents of Andy Stringfield. The band really gets your foot tapping on this old favorite. Finally, the band burns it up on the old quartet classic He Set Me Free, I am always amazed at the talent these guys have. It is no wonder they win the Singing News Favorite Band year after year; they are tough to beat.

The project kicks off with Just Drink the Water penned by Lee Black, Gina Boe, Jerry Salley This is an upbeat, acapella number with impeccable harmony about working to bring souls to the well. The upbeat Come to The Well, co-written by Signature Sound’s own lead singer, Devin McGlamery, Jason cox and Kenna West. Arthur Rice deliver a strong performance on this cut, calling everyone to the life-giving water, drink once and you’re thirst for life will be quenched!

Jeff Chapman takes the spotlight on the title track Everything in Between and shows just why he is a fan favorite. Few can deliver a feature as smooth and rich as Jeff, he is truly one of the best out there today, in my opinion and he demonstrates just that on this cut that proclaims that Jesus is truly the first, the last and “everything in between”.

Loren Harris is featured on the mid-tempo anthem I Have Overcome another winner written by the extremely talented Dianne Wilkinson. This number will have you raising your hands and singing right along as you praise God for the trials and struggles that you have overcome.

Jeff Chapman gives us another strong performance on the acapella, Dianne Wilkinson cut Nothin’s Gonna Keep Me Down, you don’t typically hear an acapella bass feature but Jeff shows it can be done and done extremely well. Jeff knocks it out of the park on this song that says somethin’s gonna get us down but He is always there to pick us up and set us on solid ground. This is a fun song, that will have you singing it long after it ends.

Ready for Glory is an old-time convention style cut that was co-written by Rebecca Peck and Dianne Wilkinson all about heaven. Jerry Martin shines as he belts out those high notes. He gets better and better with each project the Kingdom Heirs release. He has joined the ranks of some of the best in Southern Gospel music in this writer’s opinion.

Loren Harris takes the lead again on I’ll Never Get Over the Blood written by Kingdom Heirs drummer Dennis Murphy and Trey Wilkins. This is a simple song with a powerful message about the cleansing power of the blood that brings salvation.

Johnson Atman Jr. wrote the acapella Holy, Holy is What the Angels Sing, talking about that great day when we can sing redemption’s song and all of heaven’s angels stand silent.

The project wraps up as Jerry Martin steps up and takes the lead on yet another Dianne Wilkinson song, High on Zion’s Mountain. Dianne has written some beautiful songs in her career but it’s the ones about heaven that I think she has a special gift for. Listening to this cut it’s as if she had Jerry Martin in mind. His smooth, rich tenor blesses the heart on this number and those highs ring like a bell as he sings about the promise of heaven.

This album will take a place in my collection as a favorite.  If you are a Kingdom Heirs fan, I believe you’re going to love it. If you’ve never listened to the Kingdom Heirs before, I urge you to get this project, you will not be disappointed. To find out more about the Kingdom Heirs, visit their website at www.kingdomheirs.com.

Staff Writer/Reviewer
Jeff Lowe, from Massillon, Ohio, I love southern gospel music and have been involved in it in one way or another for 40+ years. I first started singing bass in The Soulseeker's as a young teen. I started the Master's Quartet in 1996. In 2009, I started Mercy River Quartet and ten years later we are still serving and praising the Lord. I love serving with Mercy River. He has blessed us greatly and we count it a privilege to be able to serve Him and present the gospel in song. I'm excited to back with AbsolutelyGospel.com and am looking forward to being here for a very long time! 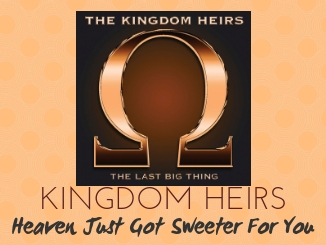 Kingdom Heirs – Heaven Just Got Sweeter For You 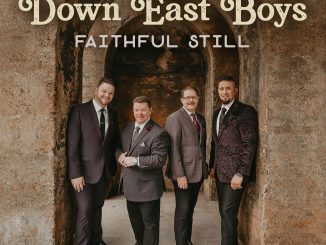 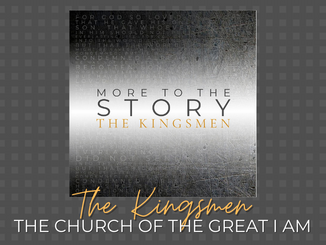 The Kingsmen – The Church of the Great I Am