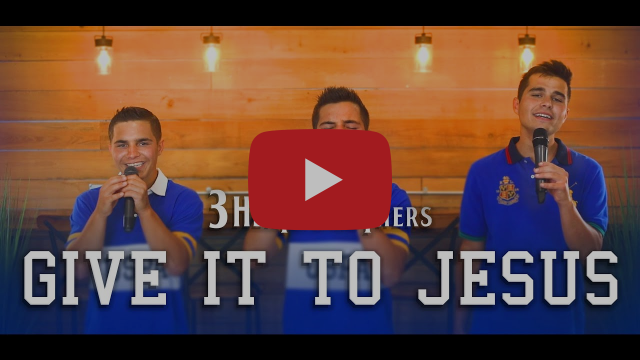 Watch the 3 Heath Brothers sing “Give It To Jesus.”

Arden, North Carolina (August 6, 2020) — As part of the next generation of gospel music artists, the 3 Heath Brothers have quickly captured attention with their powerful voices and unmistakable calling to spread God’s word. The trio records music they believe in, with words they hope others carry through daily life, giving encouragement and hope.

With their latest single, the timely “Give It To Jesus,” the 3 Heath Brothers continue this mission, reminding listeners that when life is tough, they can give all their burdens and chaos to Jesus.

Nicholas Heath, who wrote the song, says at the time, he didn’t realize how relevant it would become. “It is a song that has almost become our theme song during this time when there are so many questions and not many answers,” says Nicholas. “No matter what any of us are going through or dealing with and no matter how we’ve been hurt or our questions…the safest and best thing we can always do is give it to Jesus.”

The moving song is the latest single from the trio’s Horizon Records debut album Who We Are, which showcases the brothers’ creative arrangements, song choice and production, making an impressive statement about their music, mission and beliefs.

Stream “Give It To Jesus” HERE.

The Inspirations Release A Pioneer Legacy on Horizon Records